My name is Zach Tolan, or "Mr. Zach" to my students.

This year, your son or daughter is invited to join me and my group of awesome students each week in my ultra fun, ultra affordable, live courses for kids!

Whether you got here because you heard about one of my FREE beginner's piano camps (still enrolling!), or you are considering enrolling your son or daughter in my school-year virtual music courses through Niles, Hamilton, or Saugatuck Community Schools, or some other way... I want to welcome you!

If you'd like to hear about my Fall schedule for kids piano, guitar, ukulele, violin, and cello courses, check back here later, or add your name to yellow form and I'll email you when it's ready!

If you're brand new to my program, then we have a LOT of catching up to do! The short version is that I'm INTENSELY interested in teaching the kind of music my students WANT to play, and I'm planning Fall electives for what I think will be the coolest, most self-motivating set of music courses for kids anywhere: Think... Disney songs, music from video games like Minecraft or Mario, songs from Star Wars, or the very best classical music, like Fur Elise. The GREAT stuff!

The reason I'm able to teach really cool music to beginners right away, when it usually takes other methods years to get to the stuff kids actually want to learn - is because I write music so it's easy for kids to read, even young beginners with no prior experience. In fact, it's so innovative and useful that it was officially granted a US Patent in 2018. If you want to see a range of samples for young and older beginners, check out this page I originally made for students in my FREE summer piano camps: https://www.exact-notes.com/piano-camp-pre-camp-songs

If you'd like to hear more when course options become available, check back here later, or use the form to have course details sent to you before enrollment opens!

It's going to be the BEST year ever! 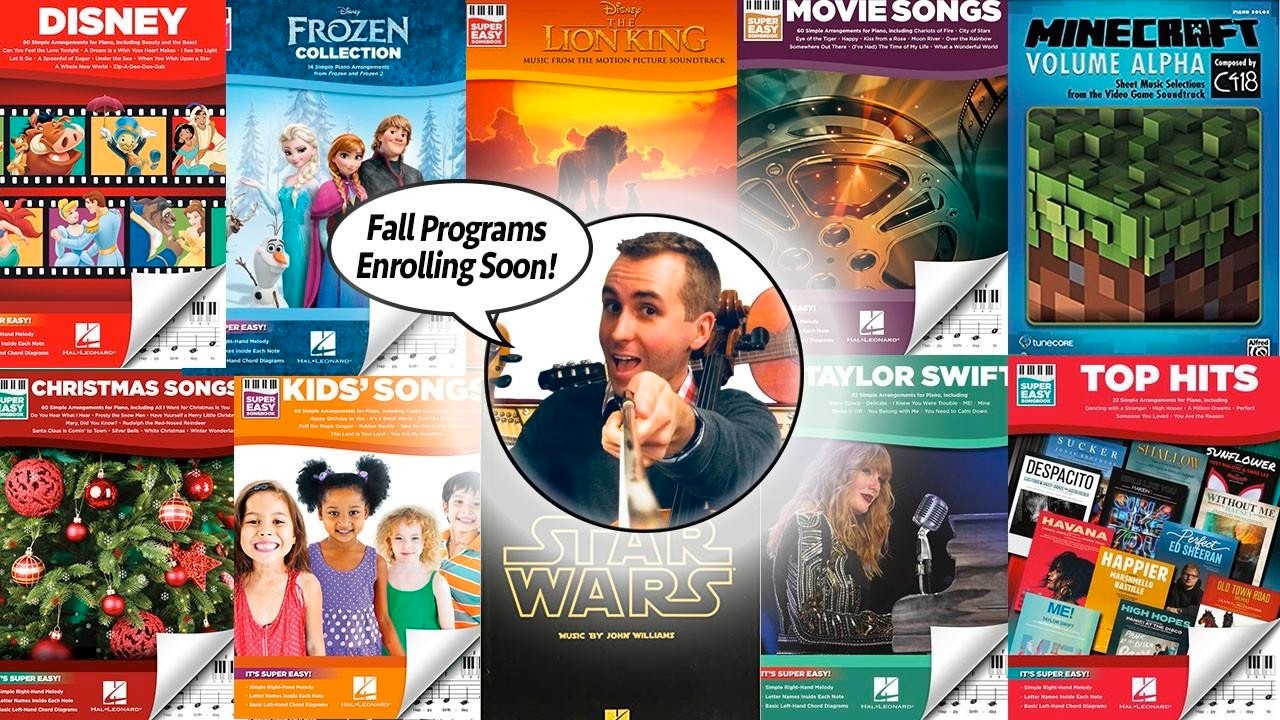 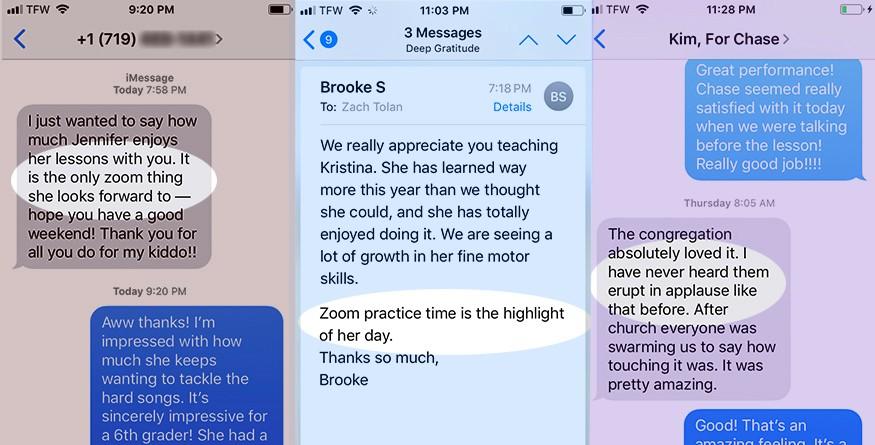 "Zach has been AMAZING for my child. He is patient and able to pull the best out of each student he teaches. He also has a phenomenal way of teaching music. He developed a program that makes it easier for the student to read the music, levels to help them progress and opportunities to interact with other people in live practice sessions. You will not be disappointed if you use him!"

Krystie S.
Parent of a Pianist and Cellist - Texas, USA

What instrument is best to start with?

There are lots of reasons kids are attracted to some instruments more than others... the looks, the sounds, and the types of music they make are some of the most important reasons.

But for very different reasons, some instruments are better to start with than others. The magic formula for success is to first know what instruments appeal the most to your son or daughter... then, help him or her get to that goal as directly as possible, in the way that is the easiest for them.

That's why I made a presentation for kids and parents for Teddy! Inspire Kids! I named it "The Top 5 BEST Instruments for Kids" and you can watch it in my Playful Learner blog at this link.

Can my student learn an instrument from an online course, even if I don't know anything about music?

Why do so many kids quit traditional lessons?

There are several things that can go wrong with standard, once-a-week-style music lessons, whether at a store, in your home, or online.

30-minutes once a week just isn't much time in a kid's world. Imagine trying to learn a foreign language (with a foreign alphabet, like ancient Greek or Hieroglyphs) in only 30 minutes a week. After just 3 minutes of setup, 3 minutes of warm-up, 6-9 minutes of review, and 3 minutes for notes and pack-up, a 30-minute lesson is only 12-15 minutes of new content PER WEEK!

Not so great, right? Well, let's look even closer. What is that "new content?" Because learning to read standard music notation is hard, even at a basic level, songs and exercises are limited to very simple selections, for a pretty long while... longer than most elementary student's attention spans.

So, with learning content that isn't motivating in the first place, not to mention so little of it, daily practice gets boring and lonely in a hurry. Mix in the occasionally missed lesson, and instead of being bored with the same stuff for 7 days, it stretches out to 14, which is like being stranded in a dry desert of boredom in a young kid's mind. So hopefully you can imagine why the usual process can get so boring or frustrating that students easily lose sight of the original dream and want to quit.

To summarize, the big pain points are too little time to learn, too much space between, and music that's too boring because the "real" stuff would be too hard to read in standard notation. I solve these problems by inviting my students to join up to 10 class options per week, on music they are excited and able to play because it's presented in a variety of styles - visual, auditory, easy-to-read forms of standard notation, and my Exact-Notes notation system, which is so simple that even students with no prior experience can start playing real songs almost immediately, and is so innovative that it was officially awarded a U.S. Patent in 2018.

Two other noteworthy pain points I solve for my students are the drudgery of practice, and the loneliness of practice. In a standard learning environment, there is just one student, and one teacher. During the standard half-hour lesson, there is a small (and worthwhile!) social interaction between the student and teacher, but outside of that 30-minutes, it's just you and your student. I solve this hidden problem by inviting my students to join up to 10 half-hour group practice sessions with other students, live, every day. This adds a HUGE new opportunity for students to practice together in small groups where they truly become friends with other students like themselves and look forward to their practice time. Plus, any time they are stuck on any part of what they're working on, instead of waiting the rest of the week until their next 30-minute lesson, they can get help from their friends, or from me directly, immediately.

"Exact-Notes" is what I call my patented music notation system. I started developing it around 2010 while I was running a set of 3 fine arts centers for kids I started around West Michigan called Lil' Learners! Fine Arts for Kids. (See the legacy Facebook page here!) I closed the centers that year and started working on making world-class online music programs. I finalized my notation system around 2016 and I was officially awarded a U.S. Patent in 2018. (Patent #9,947,238, if you'd like to look it up!) It's a music notation that was originally designed for kids as young as 4 to read and play songs on their own, and it's for more than just piano! The other instruments I play and teach that my patented notation system is made for are violin, cello, guitar, and ukulele!

It soon became clear that when a music notation works well for very young kids, it works even better for older students, like teen or adult beginners, students with special needs, and families who want to learn music from home but have no prior experience.When paired with step-by-step tutorials and a package of one-on-one private lessons, we believe it is among the world's leading learn-from-home music courses!

Is Exact-Notes for beginners only?

No, not exactly. Exact-Notes works for beginner-to-advanced music, it's just easier to read, and courses are taught in a variety of notation options that students can use, depending on their skill level and goals

Older beginners often love how much easier my patented Exact-Notes system makes playing very advanced music. It makes it possible to start your very first lessons with some of history's most famous songs, like Fur Elise and Moonlight Sonata - instead of waiting years with traditional methods.

Besides adult beginners, my easy-to-read notation system is especially good for students with special needs of many sorts, including ADD, Autism, vision impairments, and other learning disabilities from mild to severe.

How long has Exact-Notes been around?

I officially introduced "Exact-Notes" to my private students in 2014, although 2018 was my first year offering courses through Niles and Hamilton Community Schools virtual partnerships, and online to individual families across the United States and beyond.

"My son has been a student of Zach's for over two years. I chose Zach because he had worked with kids that had developmental delays in the past. He has found different ways to connect and make practice more fun. Whether he brings out Bock or yells out silly code words, he makes my son just giggle. Overall, it has been a great experience with Zach!"

Alisa, owner of For the Kidz Gymnastics 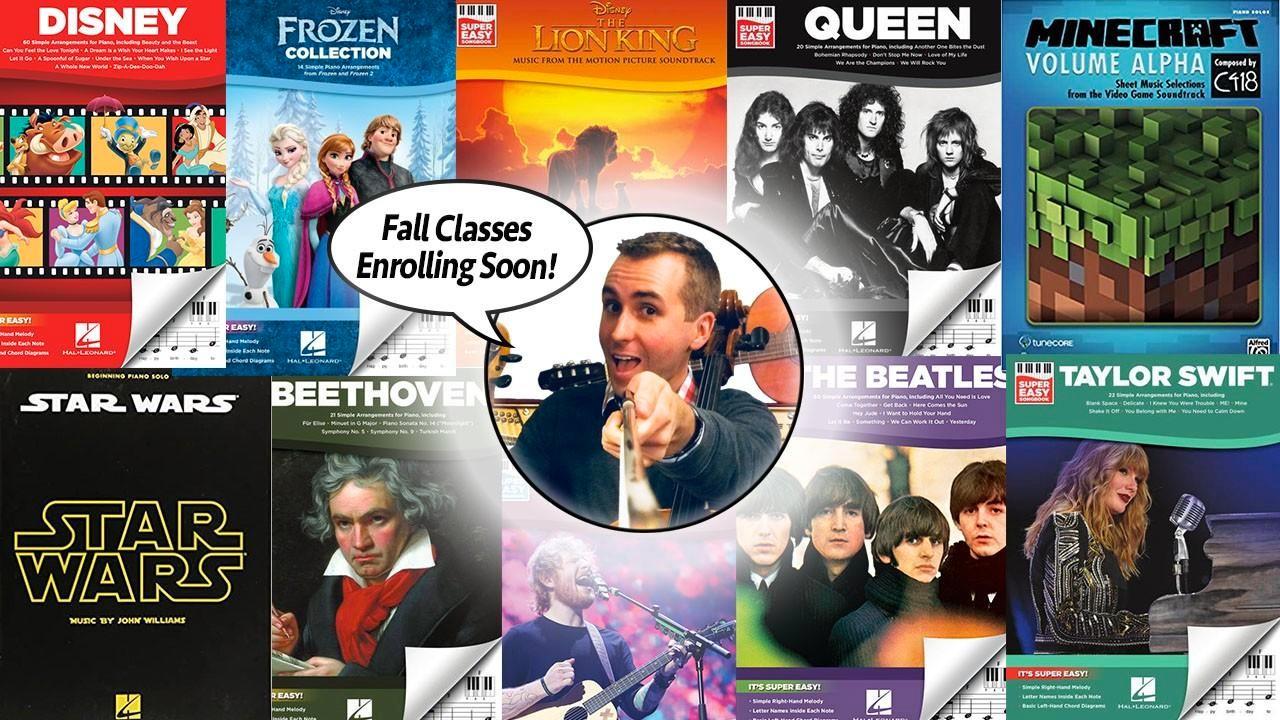 Click here to get details on my Fall course lineup before enrollment opens! 🎹 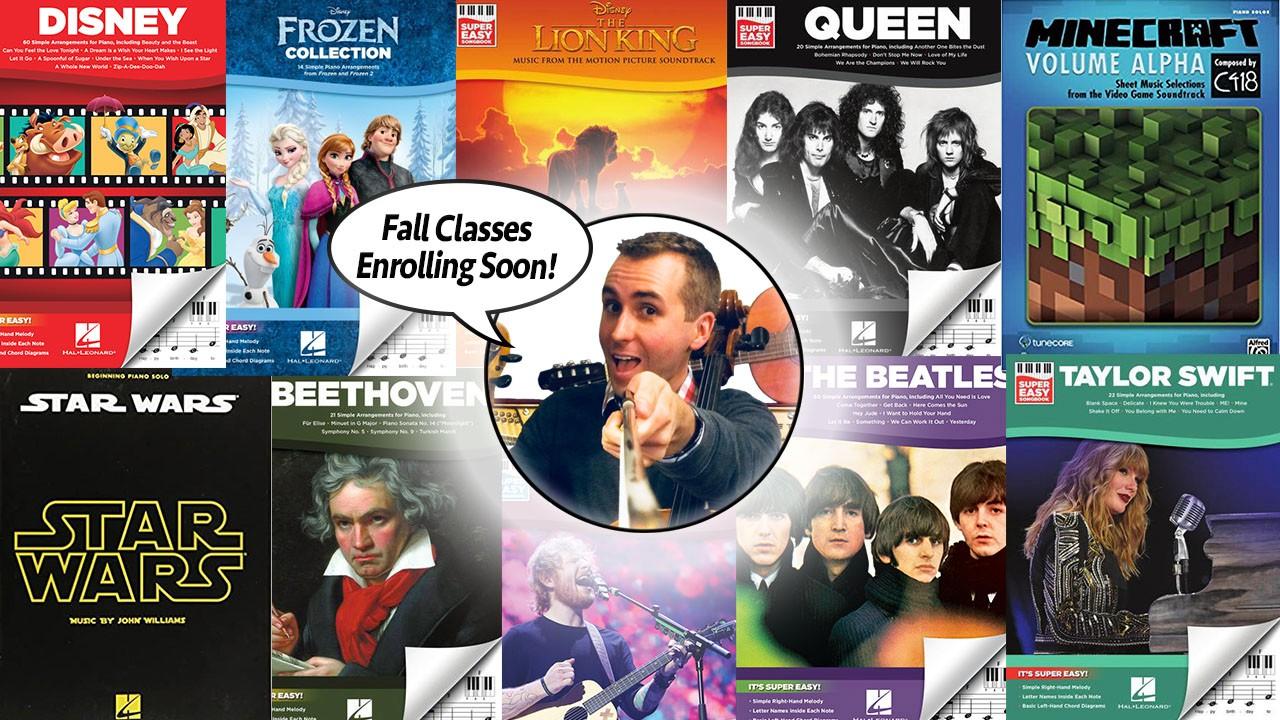 Submit your info to hear about my live, interactive kids music programs before Fall enrollment opens! 🎹